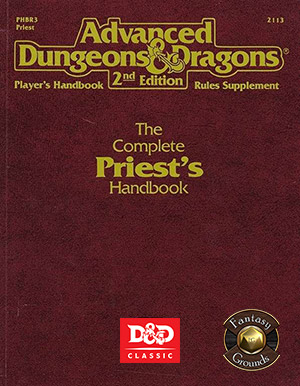 Clerics have long been among players' favorites, but now there are new priest characters for your gaming enjoyment! Within these pages are new rules for mythos-specific priests, guidelines for creating mythoi of your own, how-to's for making new priesthoods. Also here are new priest "kits," so you can play a fighting monk, an amazon priestess, a savage priest, or even a peasant priest (among many others).

PHBR3: The Complete Priest's Handbook(1990), by Aaron Allston, is a rarity. Pay attention, folks, because you'll never see this again in this series: it's the only one of the 2nd edition Complete Handbooks to actually *reduce* the power of the core class. That's actually quite significant.

In a series of supplements full of brilliant and innovative ideas, there is a definite trend towards swelling power creep. The practice of balancing mechanical benefits with roleplaying penalties embodied in this series of splatbooks eventually gave rise to 3rd edition D&D's focus on mechanical game balance. The Complete Priest's Handbook is the third book in the series, arriving after the well-balanced Fighter's Handbook and Thief's Handbook. Power creep hadn't slipped into the books' kits yet, and this book was anticipated for its focus on using clerical spell spheres to differentiate different gods and different types of priests.

As a result, it surprised many fans and readers that guidelines for priest restrictions and spell spheres actually diminished the core cleric's abilities. The new rules weren't specifically called out as optional (other than a small paragraph on page 122 at the back of the book), confusing some DMs as to whether this counted as errata. I suspect that the overall reduction of clerical power resulted in fewer players adopting the supplement's other rules than would have otherwise. That's a shame. The book is filled with excellent advice about the role of religion in Advanced Dungeons & Dragons, and includes unexpectedly creative spell spheres, interesting priest archetypes as kits, and great advice about playing a cleric.

Your Priest, Your God, and You.The first section of the supplement focuses on the role of the priest in a D&D world. This is a world where the gods literally answer the call of the faithful, which in turn affects how faith works. World creation myths are discussed alongside the creation of deific pantheons and philosophies. How each of these philosophies affects the priesthood are detailed, including priests' choice of weaponry and selection of spells. Duties, rights, restrictions, and powers of the priest all become part of a diety's unique sphere of influence in the campaign world.

It's also interesting to see how non-mechanical traditions are included. Chastity, taboos, even mutiliation are discussed as methods that individual priesthoods might require as restrictions. This adheres fairly closely to real-world religious traditions, translated smoothly into a fantasy context.

Spheres of Influence.The "spheres" system opened up types of clerics that players might not otherwise have considered. Everyone knows about thunder gods, but how about gods of rulership and kingship? Marriage? Oracles and prophecies? Time? Each sphere included a special ability and a number of clerical spells. This piecework system made assembling a priest's spell list somewhat tedious, but ultimately resulted in priests who felt extremely different from one another. Unlike 1e AD&D, a priest of a love god would in no way be mistaken for the servant of a war god. Spells, special abilities, weapons and armor would all differ.

I think this system was one of the clear improvements over previous editions of the game. While it would eventually prove to be somewhat unwieldy, the differentiation made for superb roleplaying.

However, priest kits were different from the kits presented in previous books. There are only ten, and they are archetypes that embrace philosophical concepts more than individual gods. For intance, you'll find "pacifist priest" (a concept most players had never even considered) who could worship nearly any god in the DM's pantheon. Kits provide mild benefits, but most require restricted spheres that substantially limit the priest's spellcasting power. In the end, they are very useful as role-playing tools, encouraging players to play savage or scholarly priests instead of more traditional battle clerics. But at what price?

Expanding the Possibilities.The Complete Priest's Handbook does a lot of things right. Full of flavor and roleplaying advice for customizing priesthoods and pantheons, it was the first opportunity for cleric players to expand out into unique roles for priests. While 2nd edition AD&D DMs should consider whether clerics need as large a power reduction as this book assumes they do, it's hard to fault the author for creating flavorful kits that avoid power creep.

The book is worth it alone just for getting to play blind oracular priests. 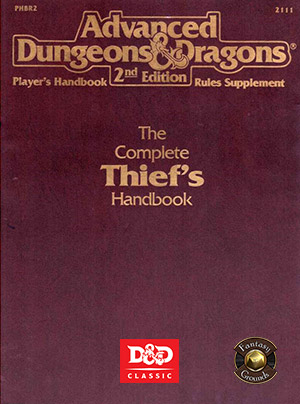 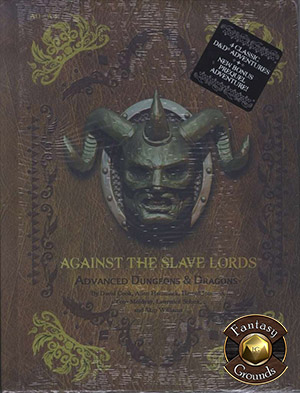 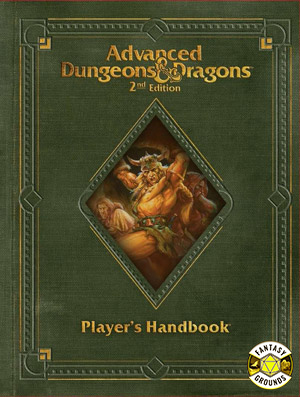 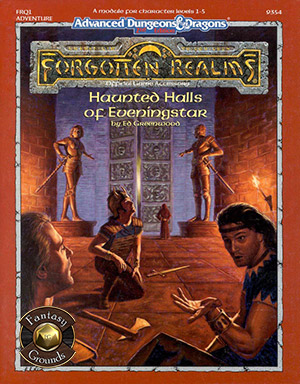 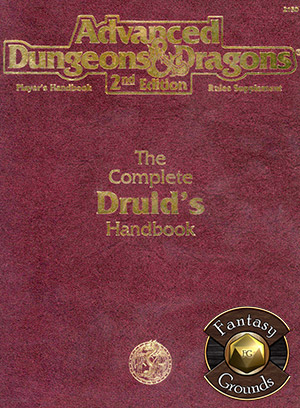 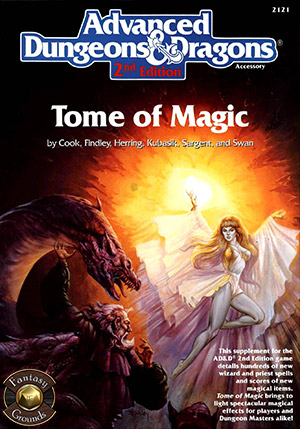