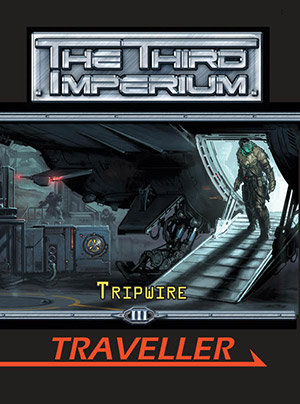 In an effort to increase their control over Jewell subsector, the Imperium has announced that a new duke will be appointed to oversee Imperial interests there. This move has caused political friction with the Zhodani who have since restricted trade to their worlds.

Imperial agents suspect the Zhodani are now planning to deploy a new super weapon, forcing the Imperium to strengthen their borders and military outposts. With tensions running high only the bravest travellers remain in business, demanding higher fees for their services.

Making the most of the current trade opportunities, the players take on a passenger who pays them a handsome fee for their services. However, the passenger is more than he appears to be and the players are soon plunged into a world of conspiracy and danger.

Tripwire is set in the Jewell subsector of Spinward Marches. The story takes the players to every system in Jewell where an adventure awaits them at every turn. This book is more than just a campaign; it serves as a useful guide to the Jewell subsector, detailing each world with a brief history, local laws and places of interest. Tripwire also includes a timeline of Jewell subsector, random encounters, new equipment and spacecraft.