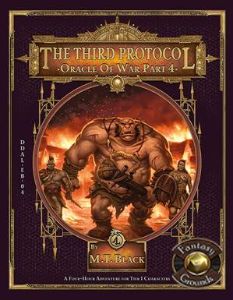 The Oracle of War has been recovered from the Mournland. Its creators respond by activating the third protocol, an instruction to recover the device and eliminate all who know of its existence. As night falls, a posse of assassins step off the lightning rail with orders to raze Salvation to the ground and retrieve the Oracle. This Tier 1 adventure is optimized for APL 4, and is the final adventure in the four-part Spoils of War storyline.