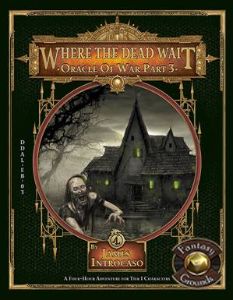 STEP BOLDLY INTO THE MOURNLAND!

On their way back to Salvation, the adventurers are ambushed by a large force of undead and forced to seek shelter in a ruined cottage. As the dead close in from all sides, the survivors turn to the Oracle of War for a lifeline. Only this time, things don't play out as expected.... This Tier 1 adventure is optimized for APL 3, and is the third adventure in the four-part Spoils of War storyline.