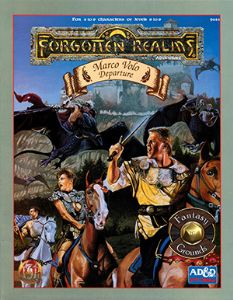 Marco Volo: Departure is the first volume of the Marco Volo trilogy, designed for four to eight player characters of levels 6 to 8. This free-wheeling adventure begins with an intrigue-laden journey from Waterdeep to Shadowdale. The party is thrown into the company of one Marcus Wands (also known as "Marco Volo"), a bothersome but likeable little rogue. In his guise of Marco, he gains unintentional help from the party members, leading only to their own arrest. To remedy that predicament, the characters are strong-armed into carrying an important letter to Shadowdale, and taking along Marcus as their "guide."

Of course, things are nowhere near as simple as they seem.

There's this little matter of the Dragonking's Eye , a powerful artifact from another plane. Naively, Marcus thought he could steal the thing and pin the theft on Volothamp Geddarm, the roguish author of many popular books about cities in the Realms. The notorious mage-assassin Felibarr Blacklance has been hired to hunt for the thief, and he is a man grimly determined to earn his fee.

Then, there's the business about this letter that's on its way to Shadowdale. It is accompanied by a rare enchanted item that wizards and fortune hunters want to obtain at all costs.

A series of adventures ensues that takes the adventurers from Waterdeep to the Way Inn, by which time they will doubtless suspect there is more to Marco Volo than meets the eye. Amid the brawls and mistaken identities, the wild rides and the glowering villains, the characters never have a chance to slow down or catch their collective breath. What results is a light-hearted, picaresque adventure in the manner ofDumas and Sabatini, and a good time is had by all!

(Except the bad guys, of course. They're never happy with how things are turning out...)