Product Details
$9.99
Buy
D&D Classics: I1 Dwellers of the Forbidden City
Wizards of the Coast 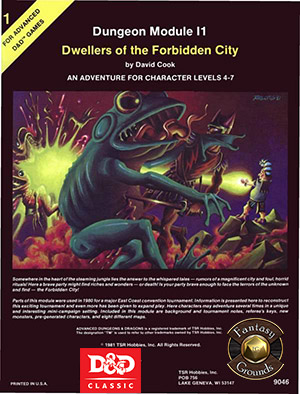 D&D Classics: I1 Dwellers of the Forbidden City

Somewhere in the heart of the steaming jungle lies the answer to the whispered tales - rumors of a magnificent city and foul, horrid rituals! Here a brave party might find riches and wonders - or death! Is your party brave enough to face the terrors of the unknown and find the Forbidden City!?

Parts of this adventure were used in 1980 for a major East Coast convention tournament. Information is presented here to reconstruct this exciting tournament and even more has been give to expand play. Here characters may adventure several times in a unique and interesting mini-campaign setting. Included in this module are background and tournament notes, referee's keys, new monsters, pre-generated characters, and eight different maps.

For characters levels 4 to 7.