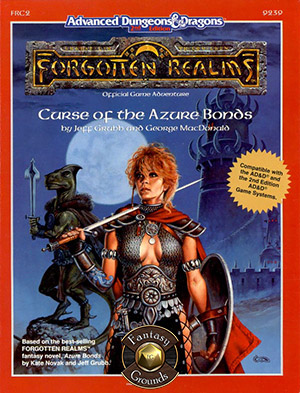 Day breaks, and the crowing of a distant rooster wakes you from an all-too-short sleep. Another day for adventure, you think as you arise - but then you stop short. You, and all of your companions, have an elaborate blue tattoo covering most of your sword arm!

And there is more to these marks than a drunken prank. As you try to find out the source and meaning of your new adornment, you are drawn further and further into danger and mystery. Will you become a pawn in somebody else's power game, or will you fight for your freedom and individuality?

Curse of the Azure Bondsis an adventure set in the Forgotten Realms game word for the Advanced Dungeons & Dragons 2nd Edition game. It is based on the best-selling novel, Azure Bonds, by Jeff Grubb and Kate Novak.

FRC2: Curse of the Azure Bonds(1989), by Jeff Grubb and George MacDonald, was the second and final adventure in a series adapting the SSI gold box computer games to AD&D. It was published in April 1989.

Act I: The Novel. Curse of the Azure Bondsstarted out as a novel, Azure Bonds(1988). Jeff Grubb came up with the idea of an amnesiac swordswoman, Alias, seeking her origins while she fought against the azure bonds that sometimes controlled her. In order to tell this story, Grubb outlined a novel that mixed swords & sorcery with mystery. He then pitched it to his wife, Kate Novak, and she agreed to come on as a co-author - although in the process one of the characters swapped sex, with the bard Oliver becoming Olive.

Azure Bondswas scheduled as the fourth Forgotten Realms novel, following Douglas Niles' Darkwalker on Mooshae(1987), which had originally been written for an epic TSR UK campaign that was cancelled; R.A. Salvatore's The Crystal Shard(1988), which had been sent to TSR as a semi-unsolicited submission; and Ed Greenwood's Spellfire(1988), which he wrote after completing his work on the Forgotten Realms Campaign Setting(1987). Grubb figures that TSR liked having him as their fourth author, because it would be easy to cancel the book if the Forgotten Realms line didn't do well. Fortunately, it did well - quite well - so the Azure Bondsnovel was published in October 1988.

Act II: The Computer Game. Meanwhile, TSR had licensed SSI to produce AD&D computer games. The first of them was Pool of Radiance(1988). SSI's George MacDonald then joined with Jeff Grubb to write the plot for the second computer game. They opted to use Azure Bondsas its basis because the plot focusing on mystery and discovery would make for a good computer game. Rather than directly adapt the book, Grubb and MacDonald created a sequel to Azure Bonds. The resulting Curse of the Azure Bonds(1989) computer game was set after Azure Bondsand featured the player characters wakening with magical bonds just like those that had once controlled Alias. As the PCs investigate, they discover that a New Alliance is trying to use the magic of the bonds.

The Curse of the Azure Bondscomputer game was alsoa sequel to the Pool of Radiancecomputer game; thus Tyranthraxus - the adversary from Pool- is one of the members of the New Alliance.

Act III: The AD&D Adventure. TSR opted to adapt the Curse of the Azure Bondscomputer game as an AD&D adventure, just as they had with Pool of Radiance. Grubb and MacDonald wrote most of the adventure book, but the deadline was very tight, so other TSR staffers chipped in, including Tracy Hickman, Kate Novak, James Lowder, and Steve Perrin. Grubb says that he found the work on the Curse of the Azure Bondsadventure for AD&D tough, as it was literally the third time he'd written the same material, for a different medium each time. Of course doing so gave him insight into the advantages and disadvantages of the fiction, computer game, and RPG mediums.

Amusingly, Grubb would return to the characters from Azure Bondsin a fourth medium when he used the characters of Alias and her companion Dragonbait in issues #2-4 of his Forgotten Realmscomic (Oct - Dec 1989).

Continuing the FRCs. The Curse of the Azure Bondsfor AD&D continued on from FRC1: Ruins of Adventure(1988), the adventure that had adapted the Pool of Radiancecomputer game. Whereas Ruins of Adventurehad been a very confined dungeon (ruined town) crawl with some related wilderness encounters, Curse of the Azure Bondswas instead an adventure full of far-flung locations, all hung together by an overarching plot.

It was (by chance) the difference between AD&D 1e and 2e adventures in a nutshell.

And Ending the FRCs. SSI's gold box sequence of computer games continued with two more in the "Heroes of Phlan" sequence: Secret of the Silver Blades(1990) and Pools of Darkness(1991). However, TSR cut back their support of the computer games following this Curse of the Azure Bondsadventure. They only published a novel for Pools of Darknessand didn't publish FRC adventures for either of the latter two games. Stormfront Studios' two gold box Realms adventures, Gateway to the Savage Frontier(1991) and Treasures of the Savage Frontier(1992), were similarly ignored by TSR.

Expanding the Realms. Though it's "just" a computer game adaptation, Curse of the Azure Bondsdid quite a bit to expand the Realms - or at least to expand what was known about the Realms back in 1989, less than two years after it had appeared. To start with, it introduced a new setting for games. At that time, the Sword Coast was clearly the main place for adventuring in the Realms, from Daggerford in N5: "Under Illefarn" (1987) through the Waterdeep of FR1: "Waterdeep and the North" (1987) and into lands north as seen in FR5: "The Savage Frontier" (1988). The Moonshae Islands and Bloodstone Pass had also received some attention through their own series of adventures, while several other major settings had been touched upon in the "FR" series.

A few months after the publication of the Curse of the Azure Bondsadventure, FRE1: "Shadowdale" (1989) continued to look at the area; Jeff Grubb and Ed Greenwood then detailed several more cities of this part of the Heartlands in Forgotten Realms Adventures(1990).

Curse of the Azure Bondswas also one the first AD&D supplements to give serious attention to the god Moander. Finally, it included stats for notable Realms characters like Alias, Azoun IV of Cormyr, and Elminster, although it got scooped on the character front by FR7: "Hall of Heroes" (1989), published just a month earlier.

George MacDonald, meanwhile, was an SSI staffer, though he'd gotten his start in roleplaying at Hero Games. This was his only work for TSR. 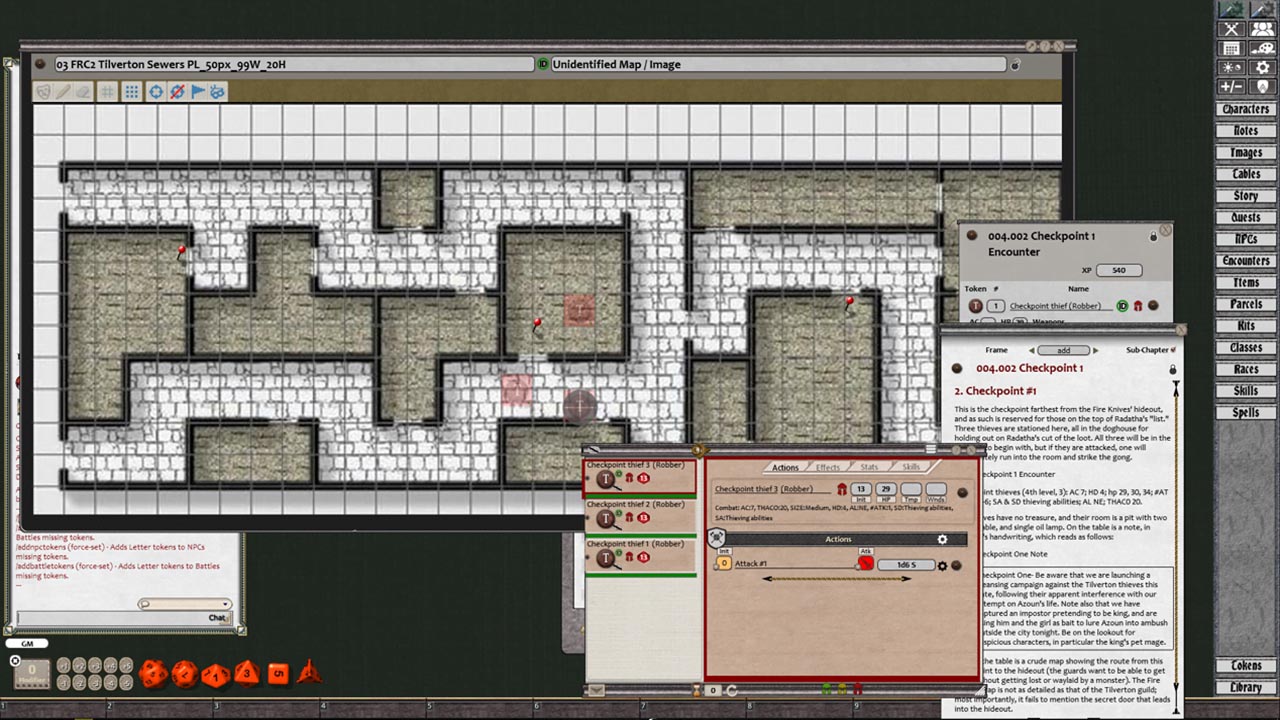 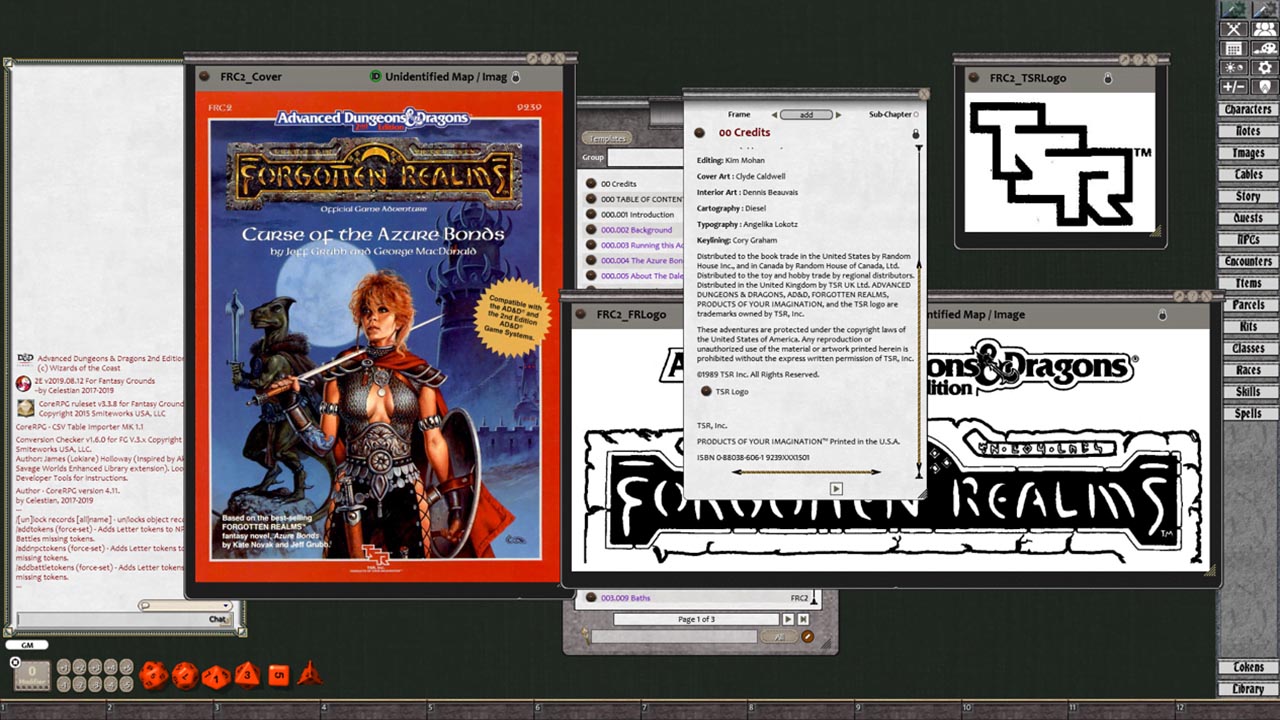 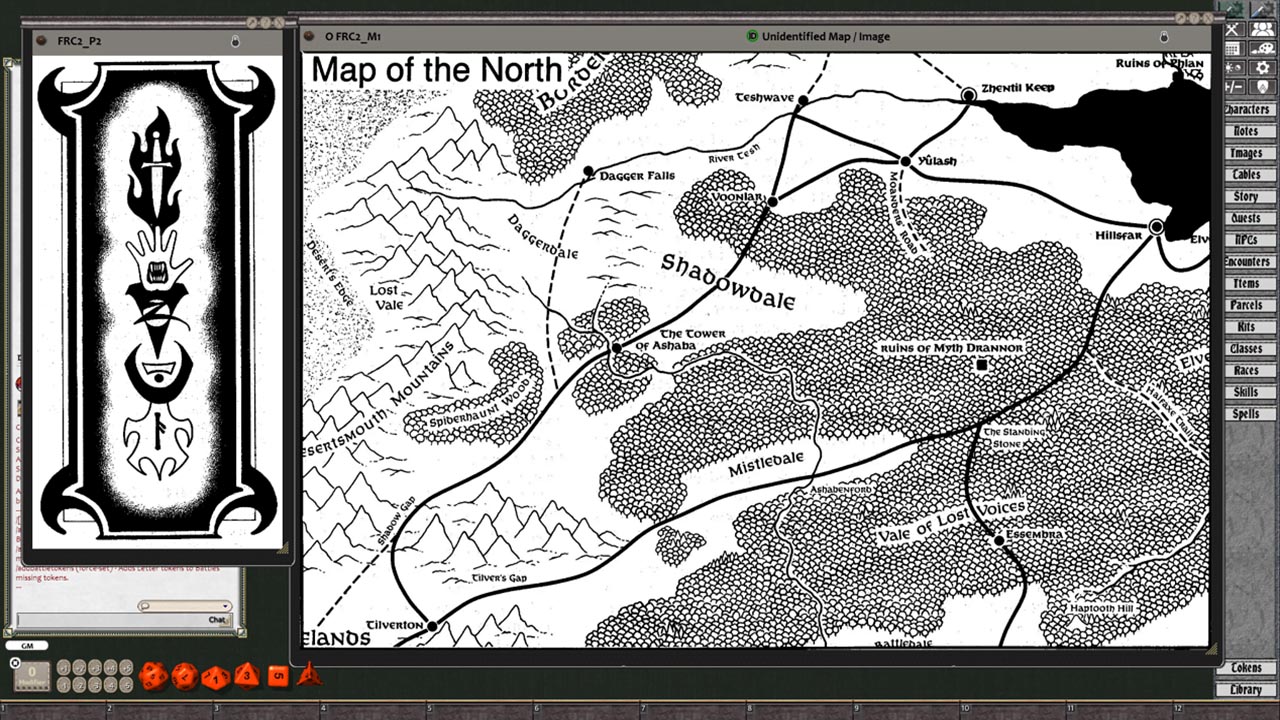 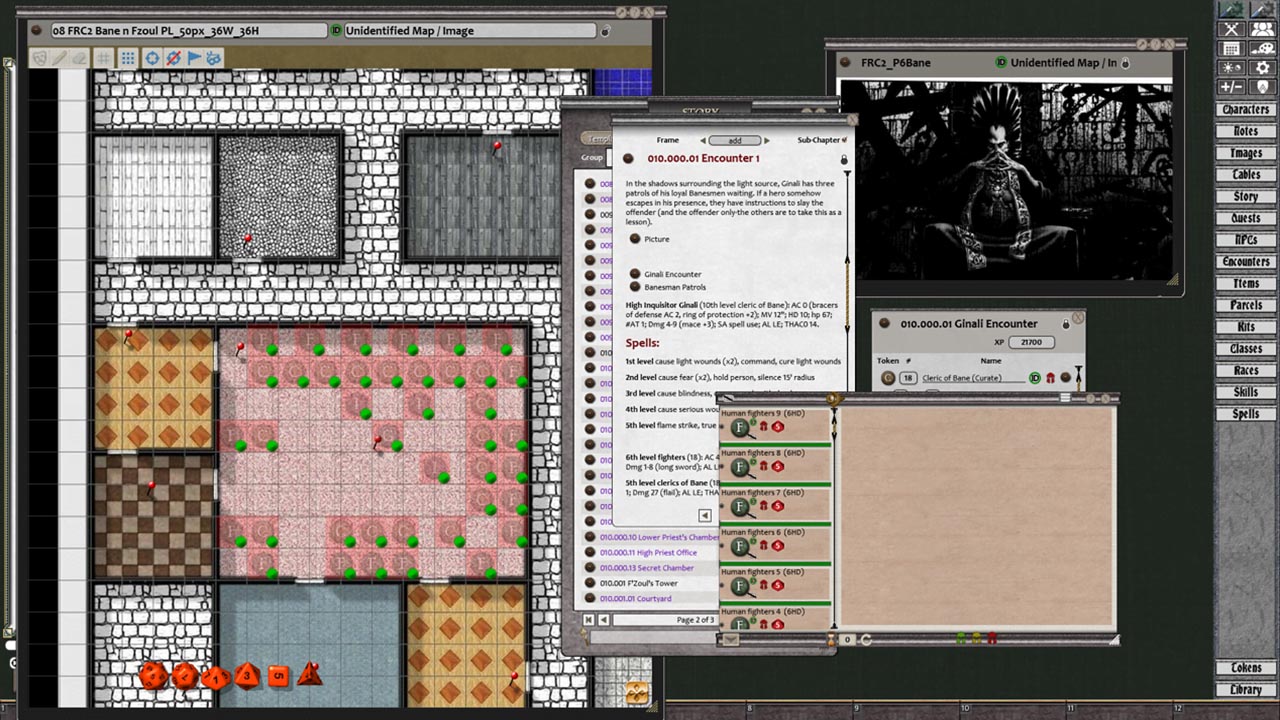 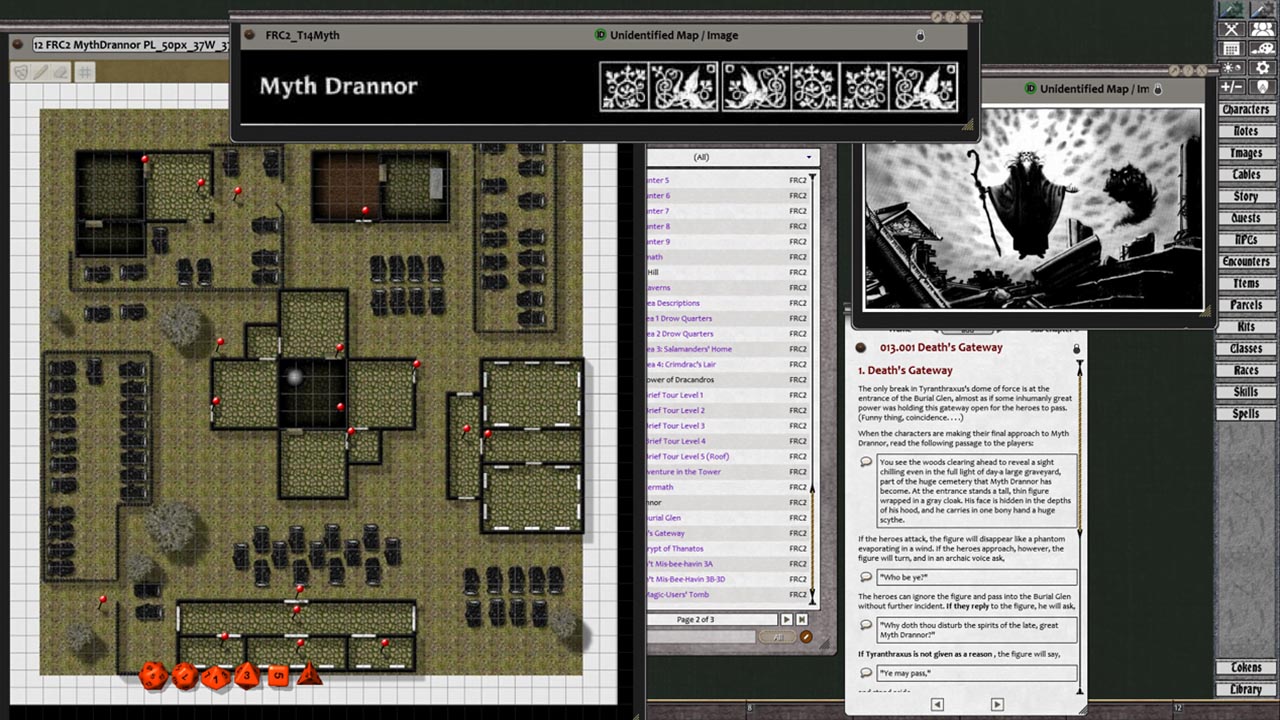 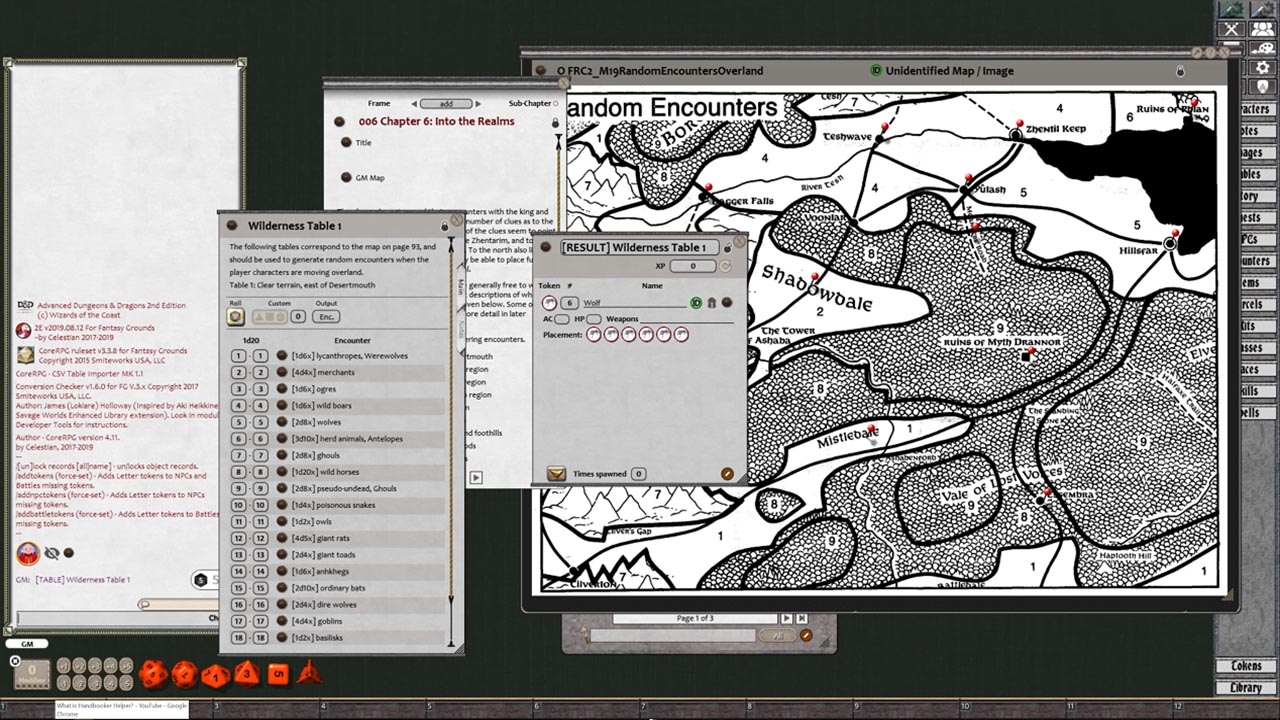 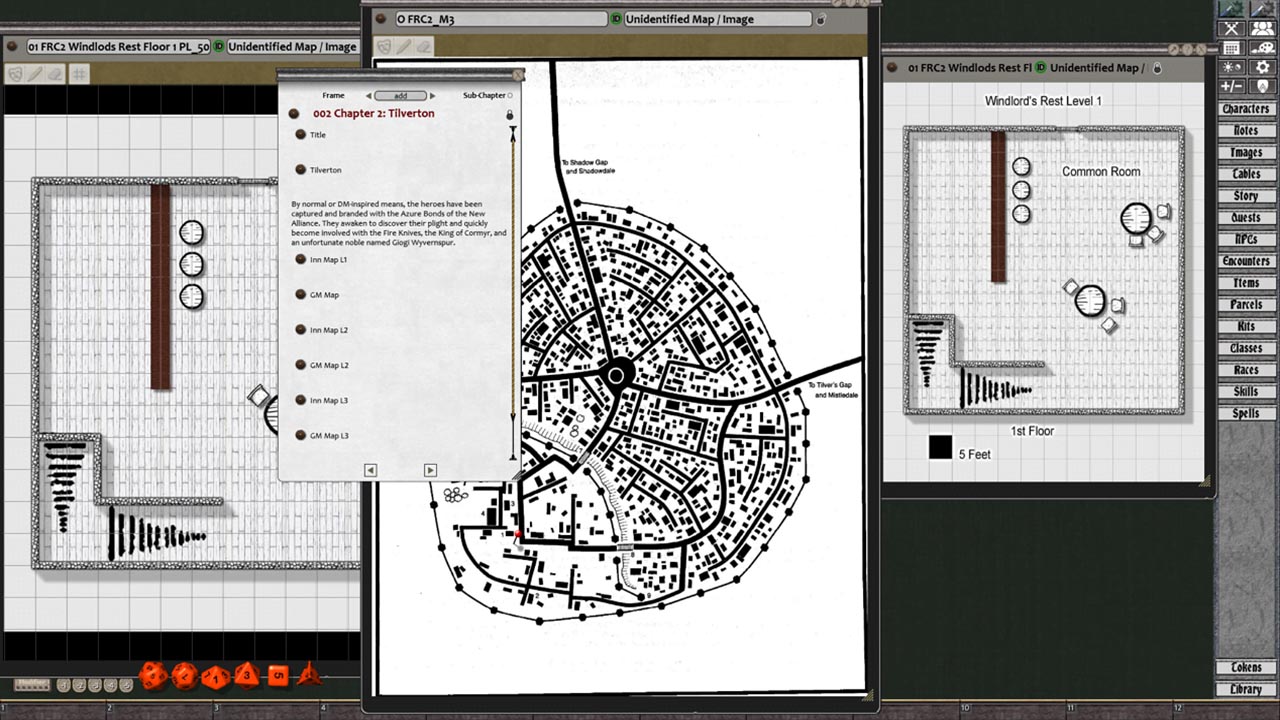