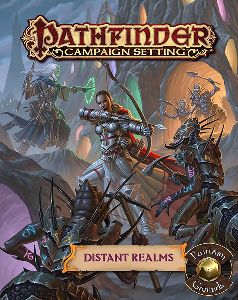 Before the first inklings of civilization rose up upon the mortal world, magnificent cities already existed within the vast corners of the multiverse. Pathfinder Campaign Setting: Distant Realms offers a look into six of these extraplanar cities that are ripe for exploration by planar travelers. Each entry includes a full-page map and a stat block for the city, a history of the city and its current major players, and a gazetteer of the city's most interesting locales. Within these pages, you'll find details about the following cities, and more:

Pathfinder Campaign Setting: Distant Realms is intended for use with the Pathfinder campaign setting, but it can be easily adapted to any fantasy world.