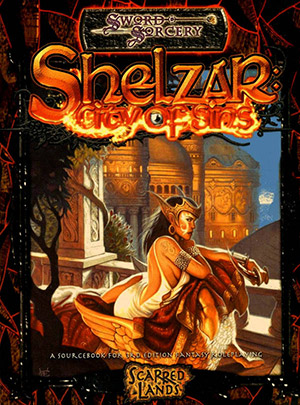 City of Pleasure and Peril

A sourcebook for any fantasy campaign, both the Scarred Lands and elsewhere.

In Shelzar the Wicked, every desire can be fulfilled for those able to pay the price. Said to be half as old as Scarn itself, Shelzar has survived conquest, catastophe and chaos to emerge as the continent's capital of decadence and sin. This volume contains a complete history of Shelzar, details for its inhabitants, locations, and culture, as well as adventures to challenge the most jaded of player characters.

Venture to the most decadent city of Ghelspad, learn it's secrets and partake of its pleasures, but never let your guard down, for death comes quickly as delight in Shelzar's smoke-filled chambers and shadowed alleys, and the hand that delivers a soft caress one moment can hold a poisoned dagger the next. Desire and danger are one in the City of Sins.