Product Details
$23.99
Buy
Echoes of the Past: The Slarecian Legacy
Onyx Path Publishing 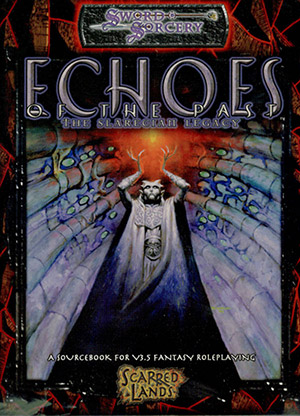 Echoes of the Past: The Slarecian Legacy

From the Shadowed Past

A sourcebook for any fantasy campaign, both the Scarred Lands and elsewhere.

Deep in the history of the Scarred Lands, the gods and titans joined forces to destroy the slarecians, a people of strange and terrible power. The full repurcussions of this mighty war remain as much a mystery as its cause. What powers did the slarecians wield? Why were they such a danger that the mightiest beings in all of Scarn cast them down? And what of their legacy still threatens the people of the Scarred Lands in current times?

This sourcebook explores the mysterious and potent slarecians, a race with a significant role in the Scarred Lands - yet intriguing creatures to add to any campaign. Learn of their origins in the prehistory of the Scarred Lands, the fall of the mighty subterranean Slarecian Empire, and the legacy these strange beings have left behind.