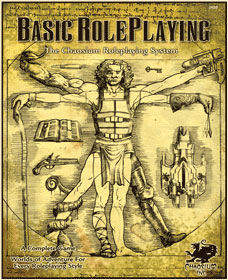 Welcome to Chaosium’s Basic Roleplaying system, a book that collects in one place rules and options for one of the original and most influential role playing game systems in the world.

This book comprises a roleplaying game system, a framework of rules aimed at allowing players to enact a sort of improvisational radio theater—only without microphones—and with dice determining whe ther the characters succeed or fail at what they attempt to do. In roleplaying games, one player takes on the role of the gamemaster (GM), while the other player(s) assume the roles of player characters (PCs) in the game. The gamemaster also acts out the roles of characters who aren’t being guided by players: these are called non-player characters (NPCs).

From its origin, Basic Roleplaying was designed to be intuitive and easy to play. Character attributes follow a 3D6 curve, and the other Basic Roleplaying mechanics are even simpler. Virtually all rolls determining success or failure of a task are determined via the roll of percentile dice. This means that there’s less fiddling with dice of different types, and the concept of a percentile chance of success is extremely easy for beginners and experienced players to grasp. There aren’t many easier ways to say a character has a 70% chance of succeeding at an activity.

Chaosium’s Basic Roleplaying system reconciles these different flavors of the system and brings many variant rules together between the covers of one book, something that has never been done before. Some of these rules are provided as optional extensions, some as alternate systems, and others have been integrated into the core system. By design, this work is not a reinvention of Basic Roleplaying nor a significant evolution of the system. It is instead a collected and complete version of it, without setting, provided as a guide to players and gamemasters everywhere and compatible with most Basic Roleplaying games. It also allows the gamemaster the ability to create his or her own game world (or worlds), to adapt others from fiction, films, or even translate settings from other roleplaying games into Basic Roleplaying. 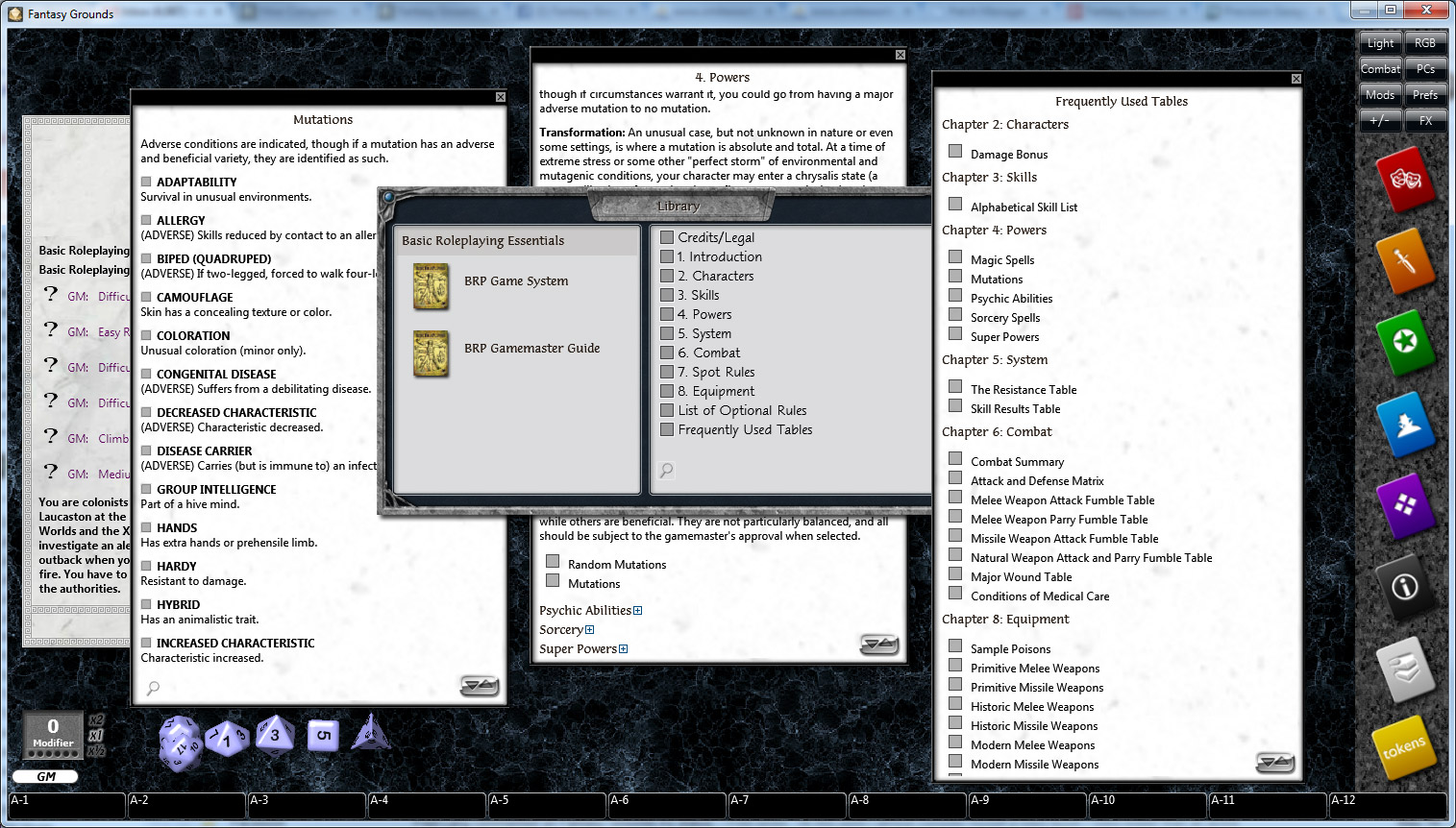 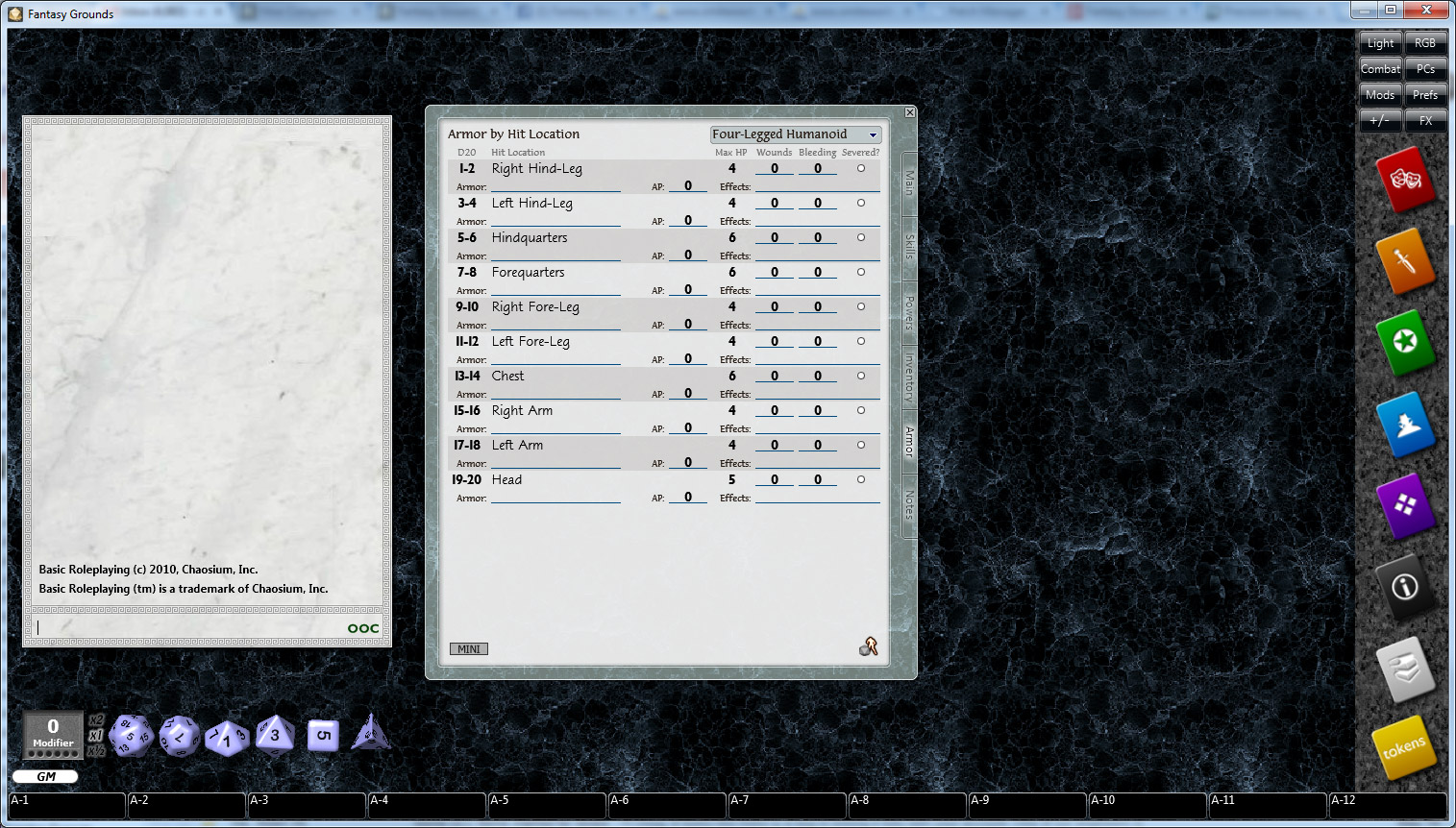 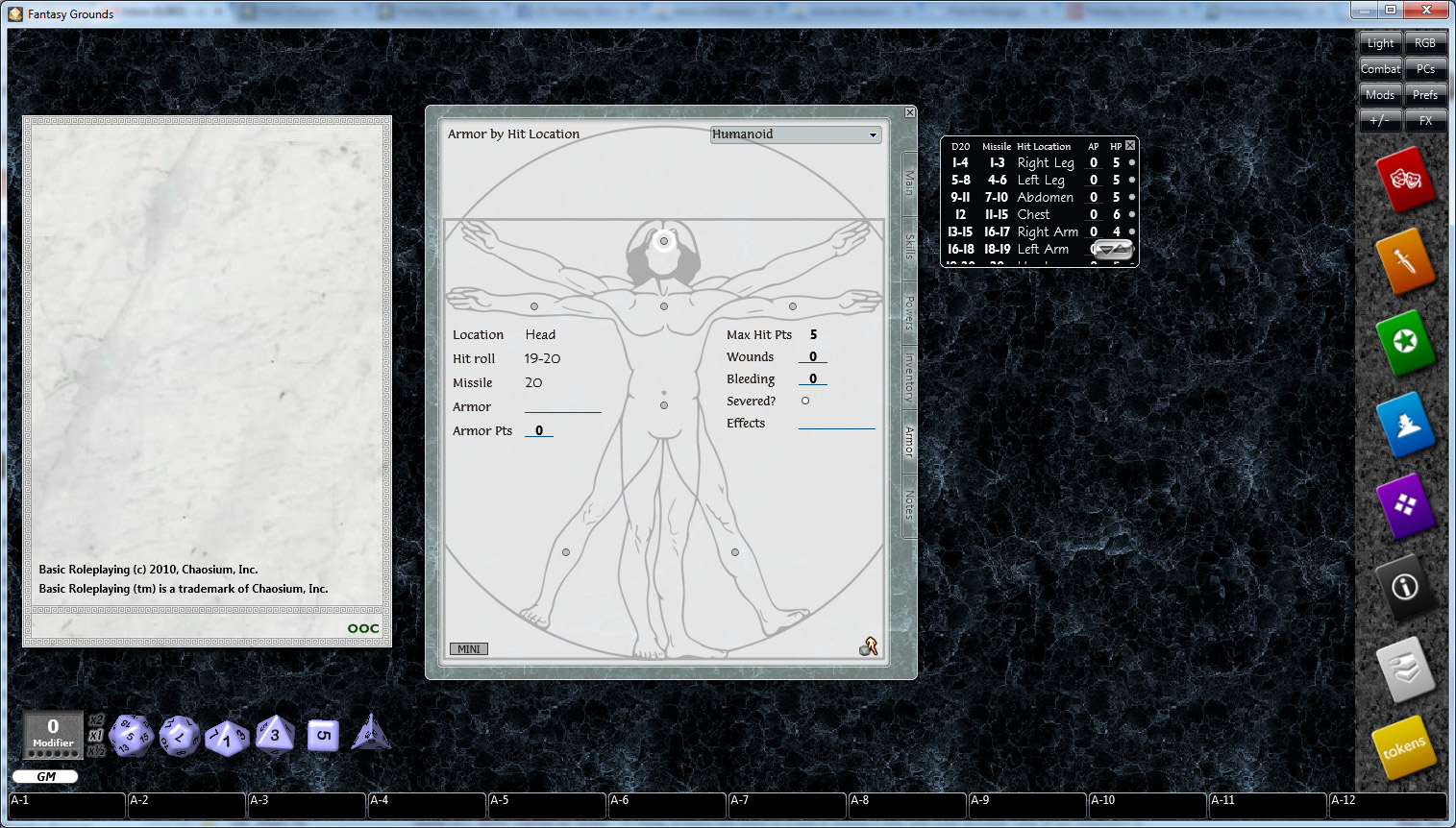 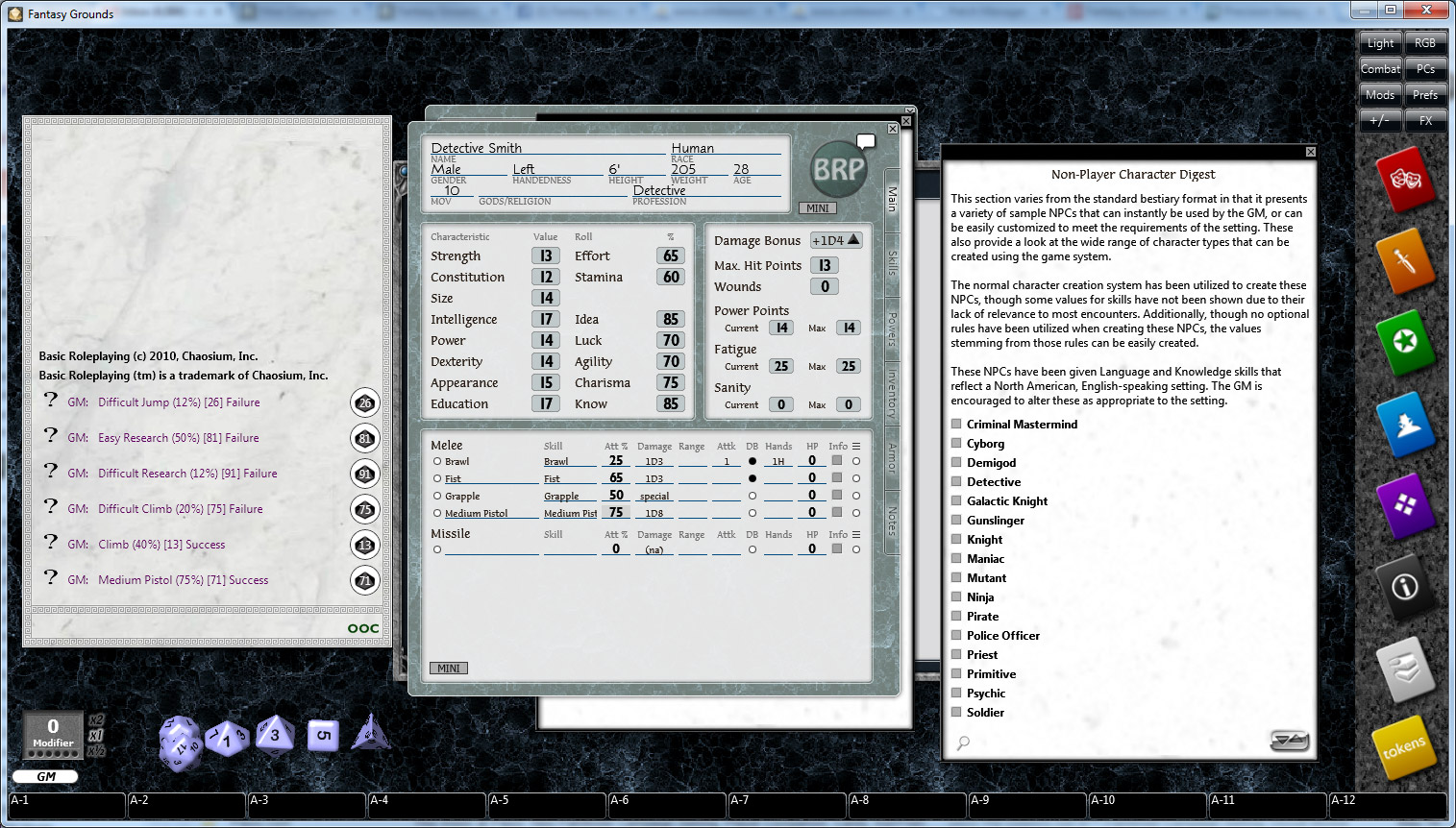 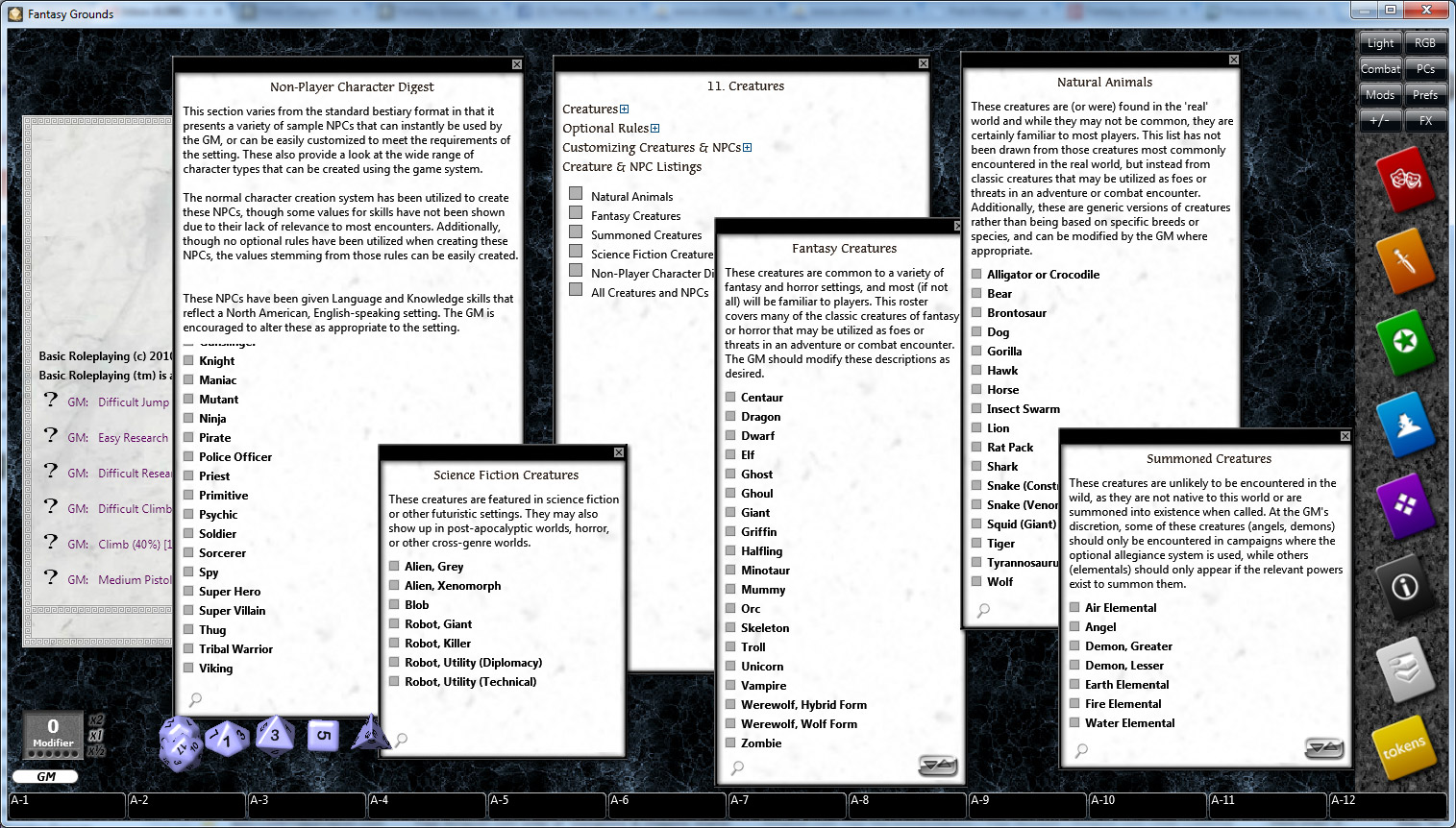 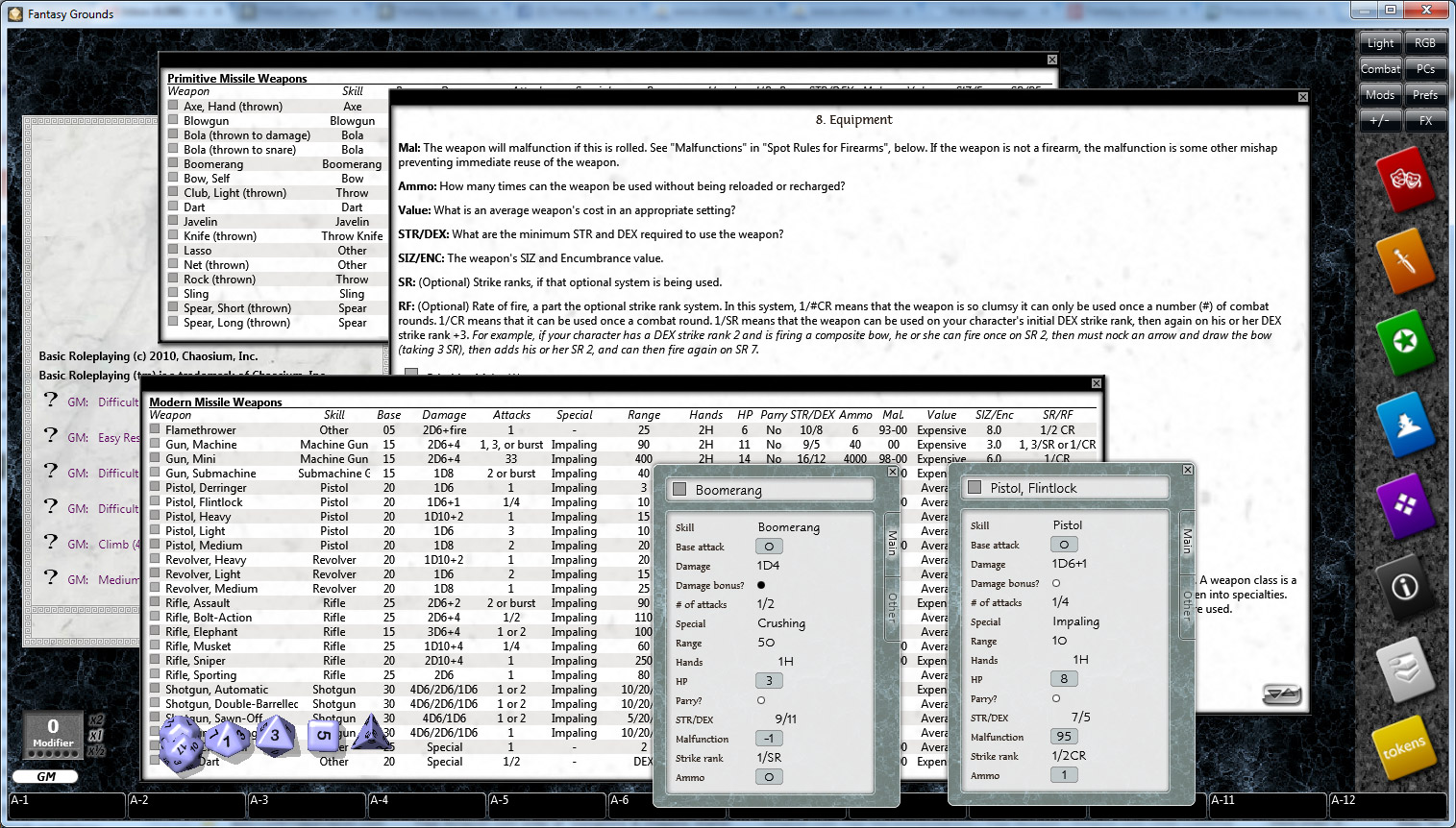 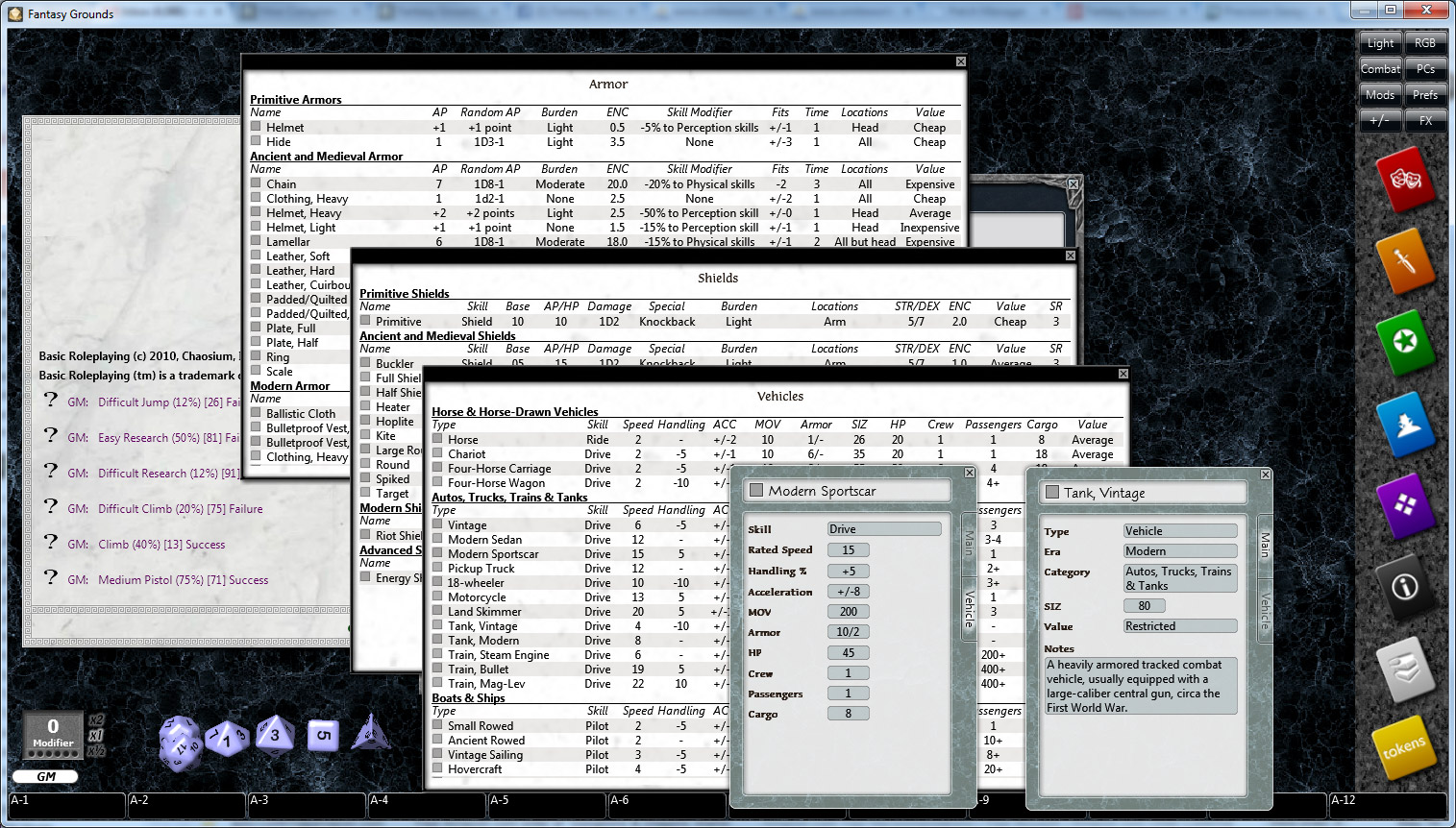 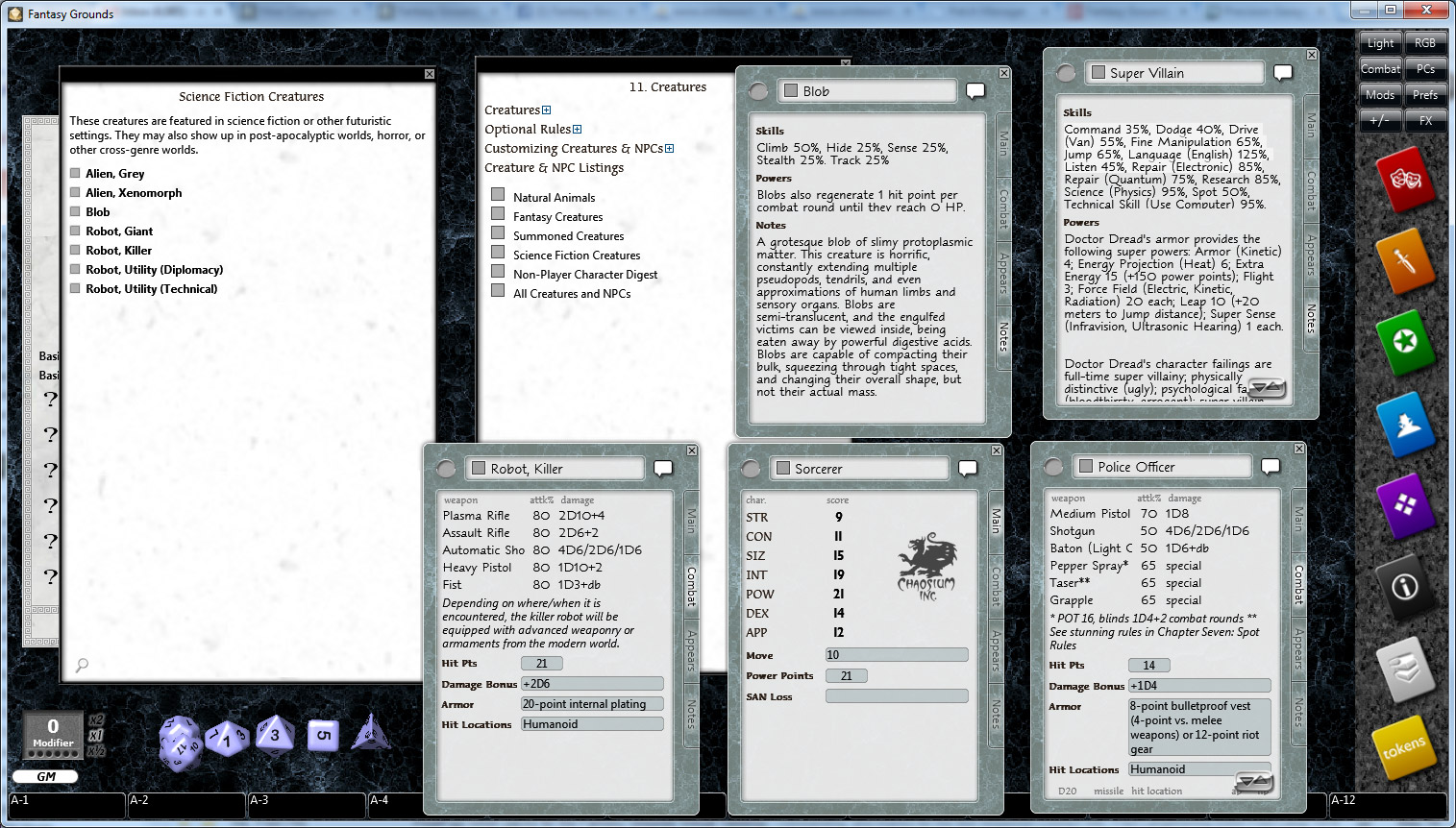 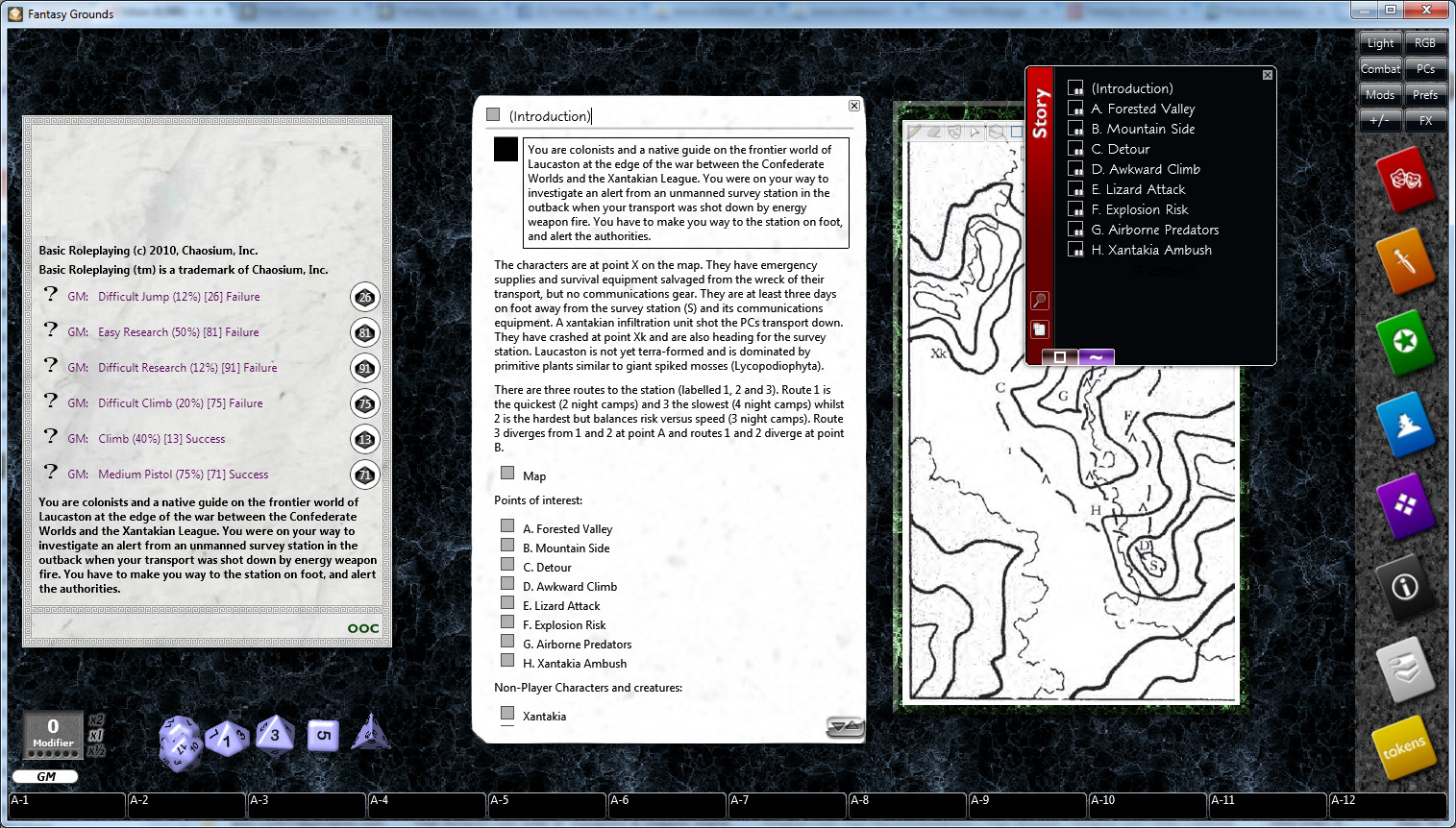 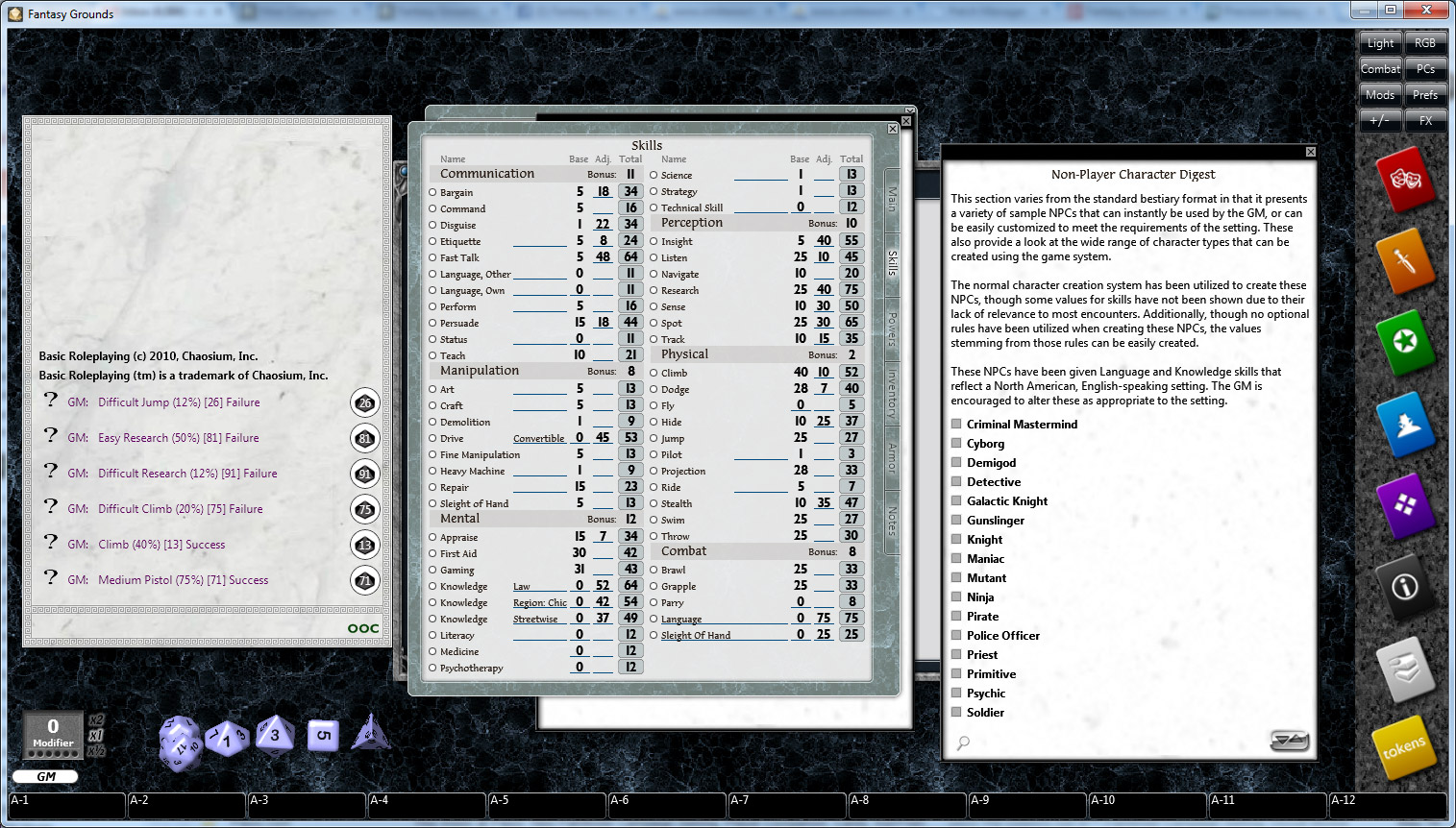 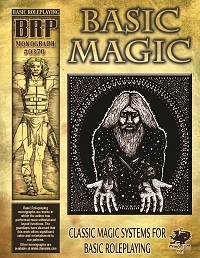 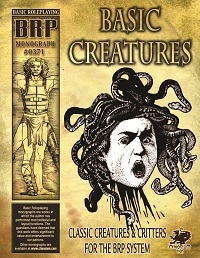 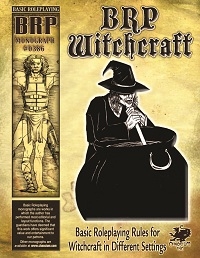