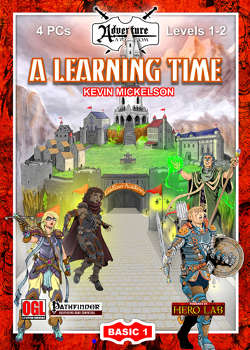 A Pathfinder compatible adventure for beginner players and game masters, 4 PCs of levels 1-2.

The first chapter of a series of seasonally thematic modules that can be run to completion in 3-6 hours.

Prepare to be schooled!

Exallizar Preparatory Academy is a place that, for generations, has trained the best and brightest heroes in the land. All of the students are the children of famous heroes, and as one of the fortunate attendees, it is your job to uphold the legacy of excellence attached to your family name.

As a student in Exallizar, you will be put through the paces like never before. This first year will see you and three strangers attempting the Gauntlet – a mysterious crucible that will put all of your studies to the test!

Also included in “A Learning Time”:

Requires: A Fantasy Grounds full or ultimate license and the included Pathfinder ruleset.