Non-player characters (NPCs) are available only to the Dungeon Master. Open the list of NPCs in a module or campaign by clicking on the NPCs icon in the right hand menu. From here DMs can create new NPCs, edit existing ones and create encounters. 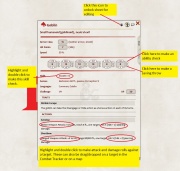 As of Version 3.2 it is now possible to create encounters with a random number of NPCs.